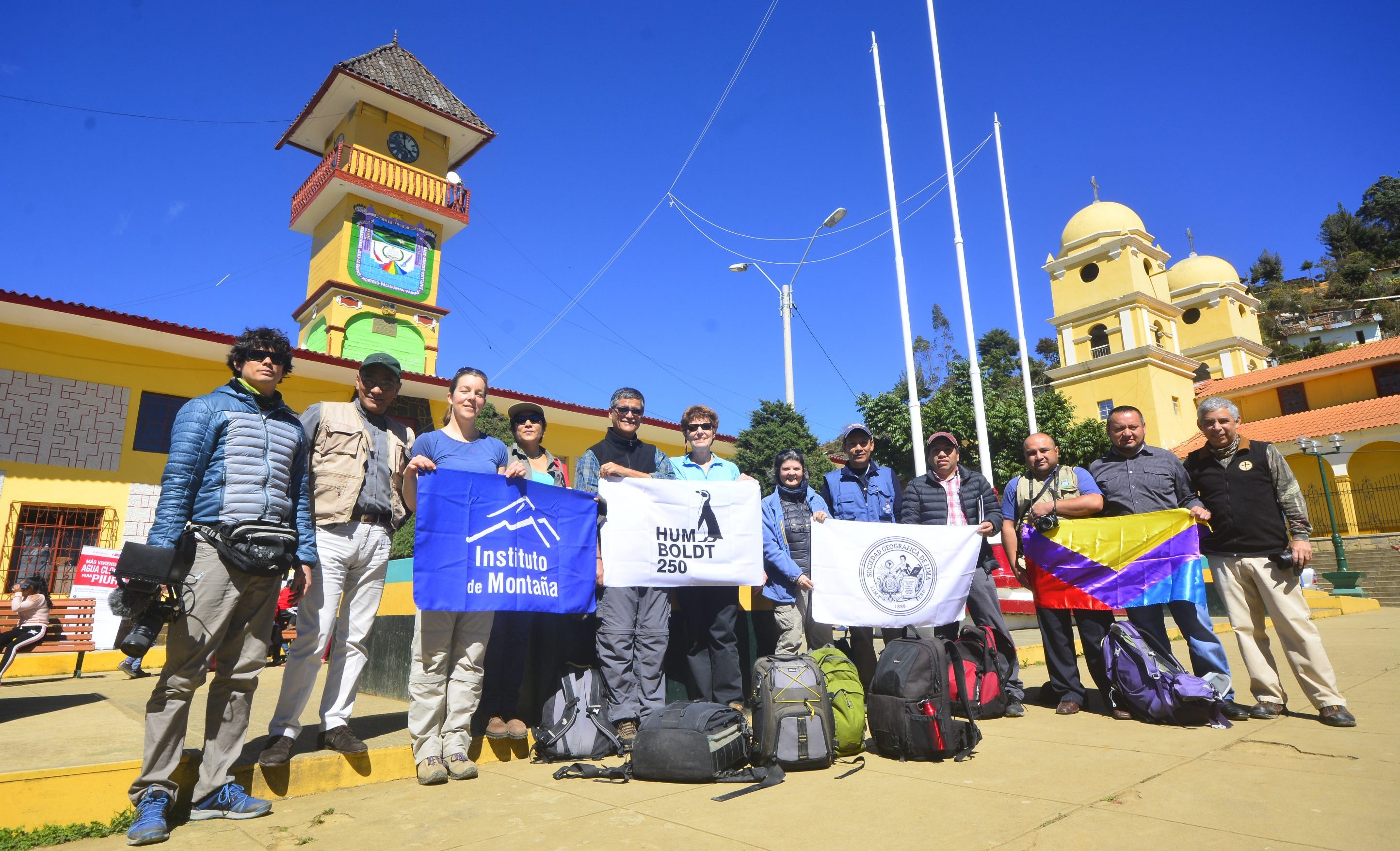 From July 15 – 24, 2019, a cross-cultural, interdisciplinary team studied a remote region first visited by the legendary scientist and explorer

On July 15, 2019 a team of scientists embarked on the first-ever, multi-disciplinary expedition to retrace a little-known segment of Alexander von Humboldt’s five-year journey (1799 to 1804) in the Americas. Humboldt, a pioneering geographer and naturalist, has been called the “second Columbus” and the “scientific discoverer of America.” Humboldt had a profound influence on nineteenth-century writers, artists, scientists, educators, politicians and explorers.

This expedition was sponsored and organized by the The Mountain Institute (TMI), in collaboration with the Lima Geographical Society and scholars at the Pontíficia Universidad Católica del Peru. Members of our team, the majority Peruvian, included archaeologists, a biologist, ethnobotanist, anthropologist, geologist, geographer and a professional photographer.

Jorge Recharte, Director of The Mountain Institute’s Andes Program and Sandra Nichols, cultural geographer and TMI Senior Fellow, were co-leaders and organizers of this expedition.

The team explored a remote, 500-kilometer stretch that Humboldt traveled in 1802 on his way from Quito, Ecuador to Lima, Peru. Our expedition picked up his trail at Peru’s border with Ecuador and followed it south along the spine of the Andes. They continued east down the Chamaya river valley, just as Humboldt did, descending into a dry tropical forest and to the confluence of the Chamaya with the Marañón river–one of the main tributaries of the Amazon. This journey through the Andean highlands and Amazonian slopes took place in what is today known at the Huancabamba Depression.

Sandra Nichols at the mouth of the Chamaya River and the Marañón in northern Peru. Humboldt stayed here during his 1802 journey.

This expedition connects to TMI’s work with mountain communities, livelihoods, culture and conservation in Peru’s Páramo region since 2006.  TMI’s Andes Program has cooperated with Páramo communities in both the eastern and western flanks of the Andes. This trek was a unique opportunity to explore local perspectives in the context of a large landscape that extends from the Pacific coast to the Amazon watershed across the Andes, the exact territory covered by Humboldt. Our expedition is also part of a larger effort to draw attention to this Andes-Amazonian region that is one of the world’s biological and archaeological hotspots. Unfortunately, this area is currently impoverished, underserved and under severe environmental stress.

Humboldt and his companions traveled on horseback and at times on balsa rafts, but given limitations of time and budget, we used 4×4 vehicles. Our expedition set out from the capital of Piura province, Ayabaca, and traveling south, we traversed complex Andean topography and multiple watersheds, locating and studying places Humboldt described in his travel journal and other writings. Research highlights included: archaeological sites on the Inca Trail (ancient, imperial road that connected Cusco (Peru) and Quito (Ecuador); a site on the continental divide–headwaters of three important rivers: two flowing to the Pacific and one to the Atlantic; páramo cloud ecosystems unique to the neotropics; and Spanish colonial towns built over Inca and pre-Inca sites. We also visited Andean settlements that in 1802 were colonial haciendas where Humboldt described the harvesting of cinchona bark. This bark is the source of quinine and was the only-known remedy for malaria until World War II. Many of those haciendas are now remote and isolated settlements. We visited one where the local community is working to protect and preserve new-to-science medicinal plants that are native to the area. Our expedition concluded on July 24 in the Province of Jaen, after 10 days and covering a distance of some 500 kilometers.

Then and Now
Humboldt kept notes about this specific trek in his journal but never wrote about this segment of the 1802 journey in his publications. Since this is a virtually unknown segment of Humboldt’s travels in the Americas, we sought to provide an account of this route and its key locations, drawing comparisons between what Humboldt saw in 1802 and what we find today. We intend to draw attention to this forgotten corner of Peru that is now impoverished, little understood and under severe environmental threat from unsustainable land-use practices, mining interests, and climate change. Humboldt appreciated the uniqueness of the region’s ecosystems, which over the last 15-20 years are being recognized as hotspots of biological diversity and endemism. Recent archaeological excavations are yielding evidence that this region was once home to a complex mosaic of cultures that occupied multiple ecological niches, and developed trans-Andean exchange routes that date back more than 5,000 years. Our expedition is the first to integrate recent biological and archaeological findings.

Background & Significance
2019 marks the 250th anniversary of Alexander von Humboldt’s birth. He was the most acclaimed geographer-scientist of the 19th century, and the inspiration for generations of explorers, writers, artists and scientists, and for numerous scientific expeditions and the creation of geographical societies in the U.S. and elsewhere. However, over the past century Humboldt has faded from public memory in the English-speaking world. In Germany and in Latin America during this anniversary year there are multiple congresses, exhibitions, lectures, cultural activities and media coverage commemorating Humboldt, his insights and his accomplishments  Yet, to the best of our knowledge, there are no organized scientific expeditions seeking to re-examine actual places Humboldt saw and described during his legendary journey in the Americas. This expedition aims to contribute to the revival of interest in Humboldt in the United States, Europe, Peru and elsewhere.

Check out this article that features our expedition in Amalamar magazine (in Spanish) “Un Nuevo Norte.”