Dedicated to the Andes Since 1996

In 1996, The Mountain Institute (TMI) established its Andes Program in Peru and that program became known as Instituto de Montaña.  This was a time of rapid social change in the mountain communities of the northern Andes. The following two decades saw rapid economic growth nationally, with an expansion of urbanization and economic opportunities in coastal areas plus increased labor markets in the mining, energy and tourism industries. This coincided with a rapid decline in traditional livelihoods in remote mountain communities. As a consequence, mountain habitats steadily declined along with the biodiversity that depends on these fragile ecosystems. Mountain communities were perceived as lacking the conditions and capacity to participate in Peru’s fast expanding economy.

To address these issues, the Instituto de Montaña has developed comprehensive, community-based projects designed to help locals diversify their livelihoods. Our inclusive approach has lead to innovative solutions and more sustainable local economies that respect and conserve plants native to mountain areas and the wildlife that depend on high mountain ecosystems.  The Instituto has grown significantly in the past 20+ years and is now recognized as one of the leading non-governmental organizations in Peru. As of mid-2020, the Instituto de Montaña became an independent NGO. We are proud to carry on TMI’s legacy. (Link to December 2020 press release here.)

Our op-ed in The Washington Post: “These indigenous communities are models for how to adapt to climate change.”

Our RETAMA initiative won the 2018 St Andrews Prize for the Environment!

RETAMA is the Spanish acronym for “Restoring Ancestral Technologies and Water Management.” This initiative integrates 2,000 years of indigenous knowledge of water management with contemporary science and technology. Remote Andean communities are restoring ancient water management systems to adapt to climate change. Their hybrid solutions are designed to address specific, local needs. By improving water security and supporting sustainable livelihoods, mountain communities become more resilient in the face of climate change. Humans and wildlife both benefit since water management is key to healthy mountain ecosystems. The RETAMA Initiative won the prestigious St Andrews Prize for the Environment, 2018. We see this award as a recognition of how urgent it is to find solutions that secure mountain peoples’ water and livelihoods while making sure these solutions are deeply rooted in local cultures. Link to Prize announcement. Learn more in our photo story.

Scaling Up Mountain EbA in Peru

The Scaling Up Mountain Ecosystem-based Adaptation (EbA) Program’s project in Peru builds on our years of work with remote mountain communities in the Nor Yauyos Cochas Landscape Reserve. Local livelihoods are strongly dependent on healthy grassland ecosystems and a steady supply of water. By restoring wetland and grassland ecosystems in the Reserve, local communities can better manage the declining water supply, reduce erosion and the risk of natural disasters. Mountain EbA measures help increase the resilience of both ecosystems and communities to climate extremes. These actions also improve habitat for wildlife such as the vicuña. The Mountain EbA Project in Peru is coordinating with national, regional and local governments to build support for applying nature-based adaptation methods more widely. More info here.

This initiative combined modern science with traditional knowledge to help restore the wetlands, peatlands and native grasslands of the puna ecosystems in the central Andes. High mountain communities, farmers, herders and native wildlife all rely on this fragile ecosystem—as do millions of people downstream. In the communities of Miraflores and Canchayllo, puna landscapes have been drying out and shrinking due to overgrazing by livestock and accelerating climate change. Our project helped locals repair and restore existing reservoirs, irrigation canals and other water regulating systems originally built by their ancestors as far back as 1,000 AD in the Nor Yauyos Cochas Reserve. The results demonstrate that restoring these ancient technologies, which lie unused and often forgotten throughout the Andes, could potentially help to revive the entire puna ecosystem. Around our project site, availability of local water has increased, especially in the dry season. This has led to a boost in livestock productivity and water availability and also serves as a buffer against fires. A recent initiative based on this project won the 2018 St. Andrews Prize. Our Ancestral Technologies and Climate Change project also won the 2017 Solution Search “Farming for Biodiversity” Prize for “Water Impact.”
Click for FULL PROJECT DESCRIPTION.
Reuters article profiling this project HERE. 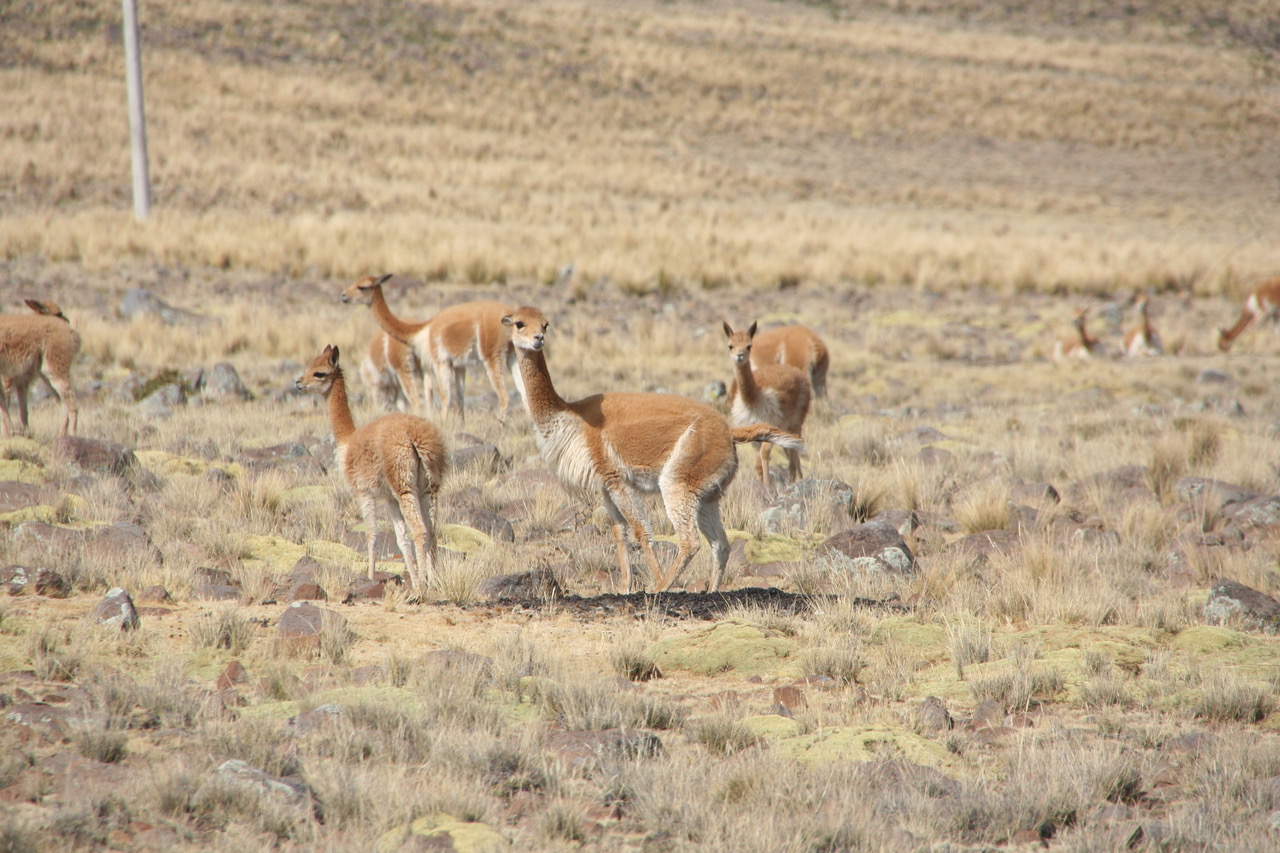 Land of the Vicuña

Land of the Vicuña is a joint initiative of the Instituto de Montaña and OIKOS to mobilize mountain communities in South America’s high Andes to conserve and restore Puna ecosystems. The Puna consists of grasslands, wetlands and peatlands that are critical to securing water sources and buffering the effects of climate change. The Instituto and OIKOS are working with an alpaca herder cooperative, COOPECAN, to sustain the exceptional economic growth they have achieved, while also focusing on restoring the degraded Puna ecosystem. Our work will improve livelihoods and help ensure healthy pastures for domesticated alpaca herds. As pressure is taken off native grasslands, this habitat improves for the alpaca’s wild cousin, the vicuña.

In the Andes mountains of Ancash, Peru, wetlands are known by their Quechua names: bofedales or oqho. Bofedales can be either peatlands (globally important carbon sinks) and/or seasonal wetlands. the Instituto de Montaña has conducted applied research on bofedales focusing on the crucial ecological services they provide. Wetlands purify water, regulate its flow and are essential for pastures. Mountain pastures provide food for livestock and habitat for an amazing variety of wildlife—from vicuña to flamingos. With funding from the US Forest Service and in collaboration with Huascarán National Park staff and Michigan Technological University, the Instituto has studied both seasonal and permanent mountain wetlands. Preserving healthy wetlands in mountains has taken on greater importance as climate change and receding glaciers make water supply more and more unpredictable.

Thanks to funding from the United States Agency for International Development (USAID), the Instituto de Montaña has worked with local communities, municipalities and universities in the Ancash Region of central Peru, high in the Andes mountains. Our project strengthened local mountain economies while helping communities adapt to the impacts of global warming. These remote communities continue to deal with a decrease in available water, an increased risk of glacial lake outburst floods (GLOFs), changing precipitation patterns, increasing temperatures and other climate hazards. Our initiative helped them advance their plans for sustainable development and their innovative ways of adapting to climate change. The Instituto also helped them leverage public funds to implement these plans. We also assisted local universities in building their capacity to provide training on climate change and conduct the applied research that is key to developing solutions for local governments and communities in the Peruvian Andes. Our work with community and grassroots organizations continues to develop new livelihood options for mountain people. LINK TO FULL PROJECT DESCRIPTION.

“Páramo” refers to the treeless, alpine plateau of the tropical Andes. This ecosystem plays a crucial role in regulating water because it acts like a sponge, trapping surplus water in the rainy season and releasing it in the dry season. the Instituto de Montaña’s bio-commerce project seeks to foster businesses based on using and processing natural products linked to conservation of the fragile Páramo ecosystem. We are working with several communities in the páramo and cloud forest zones of northern Peru. Using local, traditional knowledge, our project studied the medicinal and aromatic plants (MAPs) of this region, along with their practical uses. Working closely with the communities of Segunda y Cajas, Yanta and Pacaipampa, we have identified 50 botanical species with promising value. Local grassroots groups are experimenting with ways to cultivate these species as an alternative to wild harvesting. We are grateful to Peru’s National Program for Agricultural Innovation (PNIA) and to the Laguntza Foundation for their support.
Check out our Spanish photo story on “Plantas Medicinales del Páramo.”

The Páramo, an alpine wetlands/grasslands ecosystem extending from Peru to Venezuela, harbors tremendous biodiversity and is a critically important water source for Peru’s mountain communities and heavily populated western lowlands. We developed the first detailed maps of the Páramo and documented its importance as a source of water to the valleys and coast. At present, the Instituto de Montaña is working with over 12 local organizations to promote economic opportunities linked to conserving this valuable and endangered ecosystem. An important part of the project is bringing together highland and lowland communities to raise awareness of the Páramo’s ecological importance and to promote compensation for ecosystem services rendered by the Páramo. This cooperation between Páramo communities and those in the lowlands who benefit from conservation can help ensure its long-term protection. These cooperative networks have been made possible through support from IUCN, the Institute von Humboldt for Biodiversity, the European Union and Arauclima.